Many consumers have long admired the Android operating system as a more “open” alternative to the closed iOS ecosystem.  But more and more, Google seems intent on ruining this past advantage.  Already, highly-admired features, like running apps from an SD card (and getting add-on storage), have been dropped from most phones.  And while Google has claimed that change was for “better security,” many observers felt it was simply to upsell more storage.

Now, with its latest rev — Android 10 — Google adds more than 60 new features to the OS.  And while some of these again are “security updates,” you can find gobs of information elsewhere that runs them down. BTW, rumor has it they didn’t give this “Q” release a food-name, because of lack of a good candidate.  Really?  What’s wrong with “quince,” or “quinoa”?

The rev does come with a host of new issues, however, such as the following:

Of course, any software update will have its growing pains, along with some workarounds.  But when you build a feature like Location Cards and don’t think through something that would be obvious to any user, you’ve got a serious problem somewhere in the product development process.  And what’s really inexcusable is that, from the posts on Google Help, it seems that issues like the Location Card problem have been known to Google even with Android Pie — and their staff responds by saying the behavior is “subjective.”

You’d think Google would have the resources to develop features that are useful and not annoying.  Perhaps 10.1?

AGC Systems has provided keen and valuable industry analysis for both private and journalism outlets.  These include the most respected media that professionals turn to for technical, business and investment information.

The Popscope is a Kickstarter-funded cellphone tripod/reach extender that allows you to take pictures as you would with a selfie-stick or camera tripod.  It works with any photo timer app that you can download on your phone, or with a Bluetooth remote.
When collapsed, the unit is 6.5″ tall, and 18″ when fully extended. It attaches to your phone by using a vise-like clamp outfitted with soft rubber surfaces. The head can angle, too, with a small wing-nut holding it in place.
Weighing only 6 oz., the unit doesn’t bog you down, as long as you have a place to carry it.  When fully extended (the feet pop out, too), you can grab the feet and use it selfie-style.
A few comments on use. First, while the tripod function is very handy, it will give the best results when placed on an already-elevated surface.  This is because an 18″ tripod will position the cellphone very low if placed on the floor or ground — so that pictures will have a less-than optimal perspective.

The developer says the unit will hold a phone up to 172g in weight, which should be adequate for most cellphones.  But the attachment works by clamping the phone in what is essentially a vise — something with which you certainly don’t want to exert to much pressure on the display glass. While the rubber surfaces treat your phone gently, it did leave a mark on this reviewer’s display-protector surface–but the mark was easily removed.  You probably don’t want to leave the phone in the unit while carrying it around, either, lest it fly off.
The Popscope comes in four attractive colors, and is offered at $39.99 with an included IOS 6 / Android 4.2.2 compatible Bluetooth remote, plus shipping.  For more information, visit www.popscope.net. 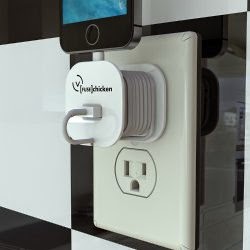 We recently received one of these units for review. As the promo material says, “PLUGdock converts your typical iPhone wall charger into a brilliant outlet-mounted iPhone dock in seconds.”
The device neatly holds your charger, cable and iPhone at the wall outlet, using a cleverly-designed extruded plastic bobbin. To use the device, you simply insert your own Apple charger, then wrap the standard Apple USB cable on the bobbin and plug one end into the charger, and the other into your iPhone 5, 5s, 5c, 6, or 6 Plus.
The unit works as described, and provides a tidy way of managing a device at a standard wall plug, even with a large protective case like the LifeProof. A few observations: While the promo and box material say “Requires original Apple charger and lightning cable,” this might not be immediately apparent to the casual observer. When removing the unit from the wall, the charger stays in the wall, since the plug usually fits tightly, but it’s no big deal. Also, the Lightning plug fits tightly on the unit (as it should), so it will need just a little bit of effort to remove it, if so desired.
PLUGdock comes with one-year limited warranty, and while the packaging carries a recycling logo (as well as RoHS), the actual construction material is not specified.  Our only negative is the price — $10, as listed at the company’s website, seems a tad high for what amounts to a USB charger in a possibly-patented plastic assembly. Cute idea, though, and kudos for their Indiegogo crowd funding.  Funny company name, and American-based, too.