Prior to his DTV work, Aldo developed various audio, content delivery and broadcast technologies at CBS Laboratories. He was also Chief Engineer at WKCR-FM and a broadcast engineer at WABC and WPLJ, all in New York City.

Aldo received his BS and MS degrees from Columbia University, is an inventor on fourteen issued patents in the fields of digital television, audio, and broadcasting, with one more pending, and has served on the Board of Directors of the Advanced Television Technology Center.  A speaker at various industry conferences, he is the author of numerous technical papers and industry reports, including chapters in the 10th and 11th editions of the NAB Engineering Handbook, and has been a regular contributor to several trade publications.

A joint recipient of a 1997 Engineering Emmy® statuette and R&D Magazine’s 1998 R&D 100 Award (both on behalf of Philips), Aldo is listed in Who’s Who in America, and is an inductee of the Academy of Digital Television Pioneers. He is a Senior Member of IEEE, with memberships in its Broadcast Technology Society and Society on Social Implications of Technology.

Aldo holds FCC Commercial General (formerly First Class) Radiotelephone and Amateur General Radiotelephone (W2AGC) Operator’s licenses. He is an inductee of the Eta Kappa Nu honor society, and was a top finalist in the IEEE-USA Congressional Fellowship and New America TechCongress Congressional Innovation Fellowship programs.  His volunteer efforts include particpating in the Catchafire initiative, being a mentor and judge with the NSTEP TechXplore program to advance STEM education in America’s classrooms, providing stage lighting design and production for local schools, and as an adjunct musician for various youth and non-profit orchestras. 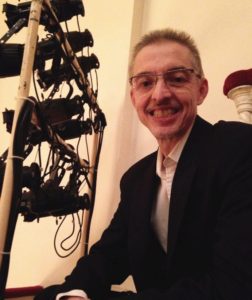 In his spare time, Aldo is an avid timpanist with the Hanover Wind Symphony and the South Orange Symphony Orchestra. As a semi-professional musician, he has performed music by composers ranging from Beethoven and Mahler to Leonard Bernstein and Philip Glass, in venues that have included Carnegie Hall and the Mayo Performing Arts Center. His other interests include astronomy, radio-controlled helicopters, ham radio, writing for Wikipedia, and the occasional blog. He maintains memberships in the American Radio Relay League (ARRL) and the Academy of Model Aeronautics (AMA).

A Rich Heritage — and a Debt of Gratitude

Aldo Cugnini has worked with and studied under several widely-respected authorities in their fields.  He has benefited greatly by having known them and others: